(Infowars) – The anarcho-communist “autonomous zone” near Capitol Hill in Seattle, Washington has reportedly embraced the anarcho-capitalist dream of creating a private vigilante police force to patrol the streets of the commune.

In the autonomous zone, the streets are apparently currently controlled by a hip hop artist-turned-warlord by the name of Raz Simone, who has established an armed private police force that does not hesitate to dole out beatings to communal miscreants.

Video footage shows Raz and Co. confronting a man for making unauthorized graffiti on Raz’s turf, which results in the “police” stealing the man’s phone, breaking his glasses, and reportedly repeatedly kicking him in the head. “We are the police of this community here now,” the man is told before the beating.

The full version of the video reveals Raz’s police force telling the man, “For your own safety, you need to go,” and “You might need a little love tap” before assaulting him.

Raz Simone and crew assault a man for tagging. Man said repeatedly he was kicked in the head, punched and had his glasses broken. For tagging #seattleprotests #seattle pic.twitter.com/B1d2dPSoQB

“Don’t be making no threats n*gga, I’ll blow your brains out,” Raz says.

A Reddit thread remains sharply divided over whether Simone’s transition to anarcho-capitalist warlord is morally defensible or not, given that he is a black man and most of his detractors within the autonomous zone and on Reddit are white.

I hope the Warlord of CHAZ makes these white boys get on their knees to atone for their racism. pic.twitter.com/w0nDdLvcEU

Raz Simone has been dubbed the “Black George Zimmerman” for his zeal and commitment to defending the community.

"Stop making fun of us we are revolutionaries." pic.twitter.com/slOjVrm1xB

“Raz’s crew is self-appointed, heavily armed, has indicated their intention to police the area, and has engaged in the use of force. I am unaware of any rival street force of their stature expressing the desire to hold authority in the area. The power vacuum has apparently been filled,” one user writes.

The Redditors are troubled by the fact that Raz’s prodigious arsenal gives him the power to enforce the law however he wishes, since no one else in the commune is armed.

"That and the guns…"
Don't be mad at the Warlord libshits, you should have come LARPing with more than magic wands and soylent. pic.twitter.com/6UsUFAmunQ

Raz had reportedly started raising private funds for his anarcho-capitalist police force days earlier in anticipation of power in the autonomous zone.

The current Warlord of Chaz was preparing well ahead of time to assert his dominance. This is the best shit ever. pic.twitter.com/m3mQ2M2Hk1 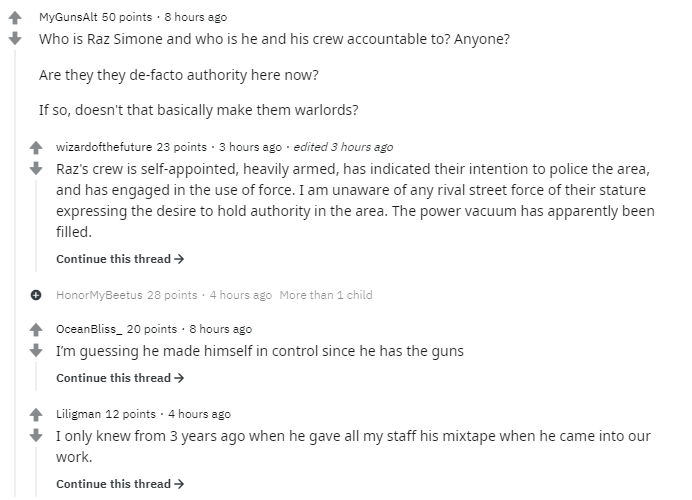 The current private police force led by Raz Simone that is handing out beatings to non-compliant citizens came into power after riots were staged in response to alleged police brutality and the inherent injustice of the capitalist system.

An example of Raz Simone’s prodigious musical prowess and ideological consistency can be seen below, in the music video for his song “They Don’t Understand.”

The autonomous zone has had other struggles in the past, such as as a shortage of vegan and soy-based products, and the ousting of a community leader who was a self-admitted “serial abuser.”